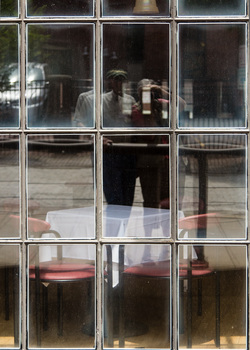 Janet, a retired Episcopal priest, and her husband of near 25 years, Tal LeGrand, have downsized in the past twoyears.  Going from eight acres in the South Carolina countryside near Edgefield to a patio home in the midst of Lexington (the Columbia metropolitan area), has taken considerable practice.

Introduced to photography by her late father, Janet has returned
to the art in recent years.  She's a Canon user and, until early in 2015, posted an image to Flickr nearly every day.  You can heck out her photo stream at the Flicker tab and her on-again-off-again blog, Write Light, at the Blogs tab.

The self-portrait -- which includes Tal -- was made in Rochester NY in the Brown Race Neighborhood on a trip in May and June of 2012 with Blount Small Ship Adventures.